Who was Senator Kenneth L. Maddy?

Sen. Ken Maddy was an exceptional state leader, well respected by both sides of the political aisle.

Former Gov. Gray Davis, a Democrat, called Sen. Maddy his “personal hero” and said that “He was a man of grace and enormous gifts.  I believe he went into politics to serve people. He was a problem solver and I admired him greatly.”

Former Gov. Pete Wilson, a Republican, viewed Sen. Maddy “one of the truly great legislators of the 20th Century.”

Ken Maddy was a 1956 graduate of California State University, Fresno who went on to graduate from the UCLA School of Law. In 1970, he won a seat in the State Assembly, beginning a 28-year career in the California Legislature. He held leadership positions in the Assembly and Senate where he played a key role in virtually every major state issue in the last quarter of the 20th Century. The legacy he left, as one of California’s most principled and effective legislative leaders, was perhaps best summarized in an article in the California Journal written shortly after his passing. 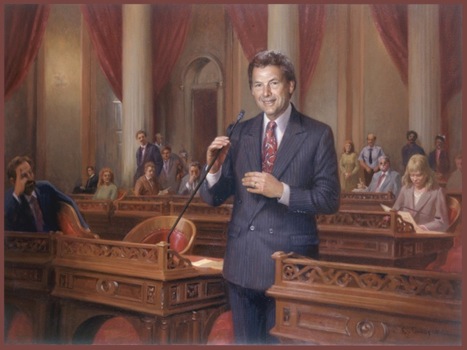 “…Darkly handsome, ramrod straight, easily amused, forever courteous, he seemed the very essence of civility in public office. Maddy’s career as a public servant is well-documented – a legislator for 28 years, first in the Assembly, then for 21 years in the state Senate. He ran unsuccessfully for the GOP nomination for governor in 1978, his campaign hampered by his candid confession that he had used marijuana as a youth. Senate Republican leader from 1987 to 1995, he was dumped by conservatives because he was not partisan enough, as though the spirit of cooperation that he exemplified was unseemly. As a legislator, Maddy was most closely associated with the Senate, where he honed his formidable legislative skills. He was as much a part of the upper chamber as the podium, desks and columns. The very title “senator” draped about him like a lush and regal robe, and he was, during his time, the embodiment of what an ideal legislator could be: pragmatic, forthright, principled, a problem-solver. Term limits drove him from the Legislature in 1998, his departure a monument to what is wrong with that peculiar notion about government and public service.

Tributes to Maddy poured forth this month. Los Angeles Times columnist George Skelton wrote that “no superlatives can overstate Maddy’s effect on the Capitol and his colleagues. He simply was one of the very best … a legislator’s legislator.” Governor Gray Davis reminded us that Maddy “worked hard to bring us together as a people and … stood up to those that tried to divide us.” State Senator Jim Costa, a Democrat from Fresno, said that Maddy had class. Yes, Ken Maddy had class. He also had decency and, despite his patrician bearing, a common touch. He seemed never to have been seduced by the trappings of power that often captivate lesser human beings.

Journalist Lou Cannon, a contributing editor to this publication who covered California and national politics for 40 years, characterized Maddy as “a reporter’s favorite politician because he never lied to you.” Cannon remembered running into Maddy last summer at a racetrack where they both had bet on the same, badly beaten horse. Maddy commented that their pick “didn’t do too well,” adding almost as an afterthought, “but then, I’m not doing too well myself.” He then explained to Cannon that he had cancer and that his doctors were not optimistic. It was, Cannon recalled, a straightforward comment, issued without a trace of self-pity – just the kind of candor and repose that distinguished Maddy even in times of acute crisis.

“Integrity” is a common and often empty word in the public arena; a slice of cardboard gussied up to look like granite and plastered onto some campaign mailer. Yet, the word takes on magnitude and power when applied to those for whom integrity is not a slogan but a way of life.

One such public servant was Kenneth Leon Maddy.”

For more information see: “Ken Maddy in the News” under the “News & Events” section of this website