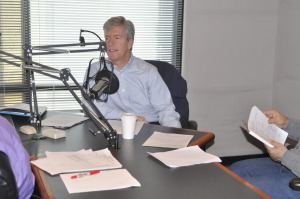 The Maddy Report – Valley Views Edition is our weekly one-hour public affairs radio program an podcast covering how State and Federal policy and politics impact the north, central and southern regions of the San Joaquin Valley. It is broadcasted on Newstalk 580AM/105.9FM (KMJ) on Sundays from 10 to 11 am.

KMJ, which uses a 50,000 watt transmitter, can be heard throughout the San Joaquin Valley.  Its signal can be picked up as far south as Santa Clarita and as far north as San Francisco.  The program will also be podcast on iTunes.

The first half-hour of this program  (“The Maddy Report” segment) is an audio version of the weekly half-hour tv program, The Maddy Report, seen on KFSN ABC30 (Sundays 10:00am) and the California Channel (Statewide – click here for local listings). The Maddy Report focuses on public policy issues being addressed at the State Capital and in Washington, D.C. that are important to California and the San Joaquin Valley.

The second half hour (“Valley Views” segment) focuses the conversation on how the particular topic specifically impacts Valley residents. To ensure a wide range of viewpoints and an informative discussion, guests from throughout the political spectrum and from throughout the entire San Joaquin Valley will be invited to participate.

The goal of The Maddy Report – Valley Views Edition will be to provide a balanced, fact-based and thought-provoking examination of issues facing the San Joaquin Valley—from Bakersfield to Stockton and every city in between.  It is intended to advance our mission of fostering more informed discussion and a more engaged electorate.

The program is moderated by the Maddy Institute’s Executive Director, Mark Keppler.

A special thank you to our Maddy Associates Senator Circle for their contributions:

The following is a list of the most recent Maddy Report shows.

TO LISTEN TO THE RADIO SHOWS ON THE WEB, CLICK HERE