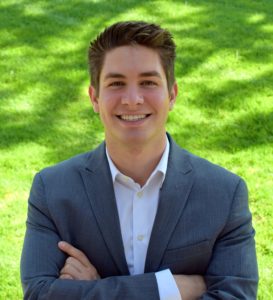 Michael Lomio was a Maddy Legislative Intern in the Merced office of U.S. Representative Jim Costa in the Summer of 2014. He earned two Bachelor of Arts degrees (Economics and Political Science) from the University of California, Merced. During college, Michael held several internships, in addition to being a Maddy Intern. He interned for the Students First Center at UC Merced, and went on to support the California High-Speed Rail Authority’s Communications Team. His final internship was at the White House during President Barack Obama’s administration.

Through the Maddy Institute I learned that when I work with community stakeholders, elected officials, and disadvantaged communities to benefit the public, I am most proud of my work. It was as a Maddy Intern where I came to understand the value of listening to others; no matter their background nor their beliefs. To this day, I feel a great nostalgia towards my work in the Congressman’s office serving the Central Valley. Even now in Silicon Valley, I often advocate for a California that will one day find itself with less inequality, more prosperity, and a greater quality of life.

After college, Michael began working at the Silicon Valley Leadership Group as the organization’s Government Relations Associate. By December of 2016, he was promoted to Senior Associate and has lead the government relations team as its Director since July of 2017. At the Leadership Group, Michael oversees and advises on all government relations efforts at the local, state, and federal levels of government and in his spare time, Michael serves as a Board Member of the Bay Area Municipal Elections Committee, which is a four-county lesbian, gay, bisexual, and transgender political action committee and as a Commissioner on the Santa Clara Citizens’ Advisory Commission where he supports the expansion of voting rights throughout the County.

The Maddy Daily has the latest on local, state and federal news. Subscribe to see what’s new in politics, agriculture, the economy, education, health, immigration and much more! Go to maddyinstitute.com to see our daily blog post! ... See MoreSee Less

Share on FacebookShare on TwitterShare on Linked InShare by Email