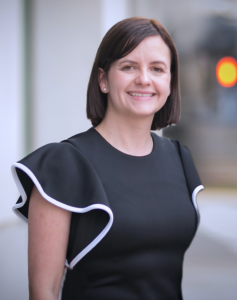 As the Institute’s Program Coordinator, Maria acts as the Chief Operating Officer of the Institute and is primarily responsible for the internal and administrative support activities of the Institute, as well as administering the Maddy Intern Scholar and Graduate Fellowship Programs in Washington, D.C., Sacramento, and various political offices throughout the San Joaquin Valley. She is also the anchor and producer for the institute’s public affairs TV Show in Spanish El Informe Maddy which airs on Unimas Fresno and CMAC.

Prior to joining the Maddy Institute, Maria worked with local non-profits in Clovis and as a freelancer for a PR company based in Florida from where she moved from in 2011. While in Florida, Maria worked for a Sports Marketing Company with the NFL Alumni, MLB Alumni and Bass Pro Shops as an Event Coordinator and Assistant Editor for their coffee table magazines. She also worked as an Assistant News Producer in Univision Tampa where she also produced and presented her own weekly segment on the nightly newscast.

Maria earned her B.A. in Mass Communications and Journalism in her native Colombia, has been married for over 15 years and has 3 young children.